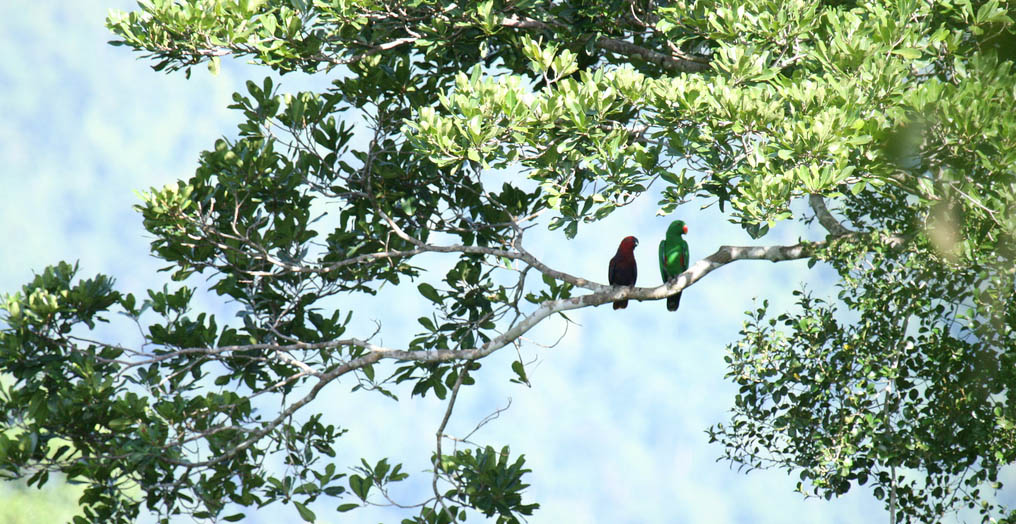 My first few weeks would be at Base Camp A, which was a 3 hour walk from Wahai. The hike to camp would take us across a gently undulating coastal plain through open forest and plantations. It was a great way to start acclimatising to our new surroundings but it turned out to be quite a hot day and for some of the venturers who were used to a cooler climate it was a little too warm. They drank all of their water within the first hour and started to show the first signs of heat stroke so we had to share water around and take it at a pace that everyone could manage.

We eventually reached Base Camp A, which had been built in a clearing in the forest on the bank of the Wae Tolurang River. It rains year-round in Seram but some months are wetter than others and this was the dryer part of the year when the rivers were shallow with broad stretches of exposed, stony riverbed that made crossings easy.

Cultivated gardens of bananas, coconuts, papaya and other edible plants on the river’s edge were evidence of the nearby village of Solea. Although this was very close to our base camp, the expedition was designed to minimise disturbance to village life and so apart from some village stays we did on the longer hikes, staff and venturers didn’t ordinarily go into villages on the island.

A loo with a view

Our first base camp was very impressive. With the help of people from the local villages a collection of temporary but solid buildings had been constructed out of timber and bamboo in a clearing in the rainforest. There were long houses to sleep in, kitchen and dining areas, stores and medical facilities and a longhouse laboratory for the scientists to work in. There was even a bar.

The toilet was a post and rail structure set up directly over the river with leafy partitions to provide some privacy. This was a bit of a shock to me as I was used to a camping code back in Australia where toilet waste is buried well away from water sources, but here in Seram villages were always located next to rivers and ablutions were typically conducted at the water’s edge. During the hikes we did in Seram I always knew when we approaching a village because there would suddenly be luxuriant green growths of algae in the nutrient-rich water of the river we were following.

We quickly learned that drinking water should always be collected upstream of these areas and treated with chlorine tablets and/or boiled. After about two months on the island I started to react to the chlorine tablets (my mouth would go incredibly dry) so I stopped using them and simply boiled all of my drinking water and this worked fine. Others used iodine to sterilise their water.

The toilet situation made for a very embarrassing experience one day. OR staff had arranged for a local Indonesian guide to take us from the base camp deep into the rainforest where he could show us a wild pig trap. We followed him to a place where a camouflaged fence created from timber and branches was designed to guide the pigs through a narrow opening. This opening had a trip wire that released a large, solid spear with a great deal of force. It was a bit unnerving to think that we might accidentally wander into one of these traps whilst on Seram.

Our guide then continued to lead us through the forest to a destination that was supposed to be well away from the base camp to show us more. Eventually we emerged from the forest and began to follow him across a shallow river crossing. Half way across everyone suddenly stopped. I followed their gaze upstream to see the base camp’s toilet suspended over the water with several venturers busy doing their thing. The water we were standing knee deep in suddenly wasn’t so appealing but the situation made for a good laugh afterwards.

A kaleidoscope of birds

With my great team of enthusiastic venturers we set up traps and mist nets to survey small ground mammals and bats in habitats near the base camp. When we weren’t busy conducting these wildlife surveys I had the opportunity to sit quietly near the river and enjoy all the sights and sounds of the forest. High in the tree tops colourful hornbills, which resemble toucans, called to each other. Australia has a rich and striking bird fauna but it was very exciting to see these large, raucous birds for the first time and a host of others in their natural habitat.

Much to my delight I also discovered rainbow bee-eaters nesting in the sandy banks of the river. This pretty little bird migrates from Asia to Australia each year. Back home their distinctive call heralds the start of summer and always makes me smile and feel excited about the warm months ahead. They are one of my favourite birds and so it made my day to be able to see them here at the other end of their long, annual journey.

All in all Solea was a great introduction to Seram and expedition life. I got to know lots of terrific people and had a wonderful time exploring the lowland forests. It was fascinating to watch the other scientists at work and see extraordinary creatures and stunning flowers up close. The venturers embraced the challenges before them and I watched as some of them blossomed with a new found confidence in themselves.

The only drawback that I can recall, apart from the directionally challenged guide, was the sandy nature of the riverbed. This proved to be home to a certain kind of flea that packed a powerful bite. I have a pretty tough hide and don’t react to too many things but the bites from this little critter came up as huge red welts on my body that looked very alarming. Fortunately they weren’t too itchy and eventually faded without a trace. Never the less I was pleased to leave the fleas behind when it was time to move on to our next base camp in the mountains.

Go to ‘Base Camp A’  Photo Gallery