Mark Wilson was a member of expedition 10F to Seram. Sadly, only four years after the expedition, Mark suffered a brain haemorrhage while playing rugby in a friendly game organized by the staff of the company he worked for. He was operated on at Romford Hospital but was left in a coma for 6 years before leaving us. Mark died on Dec 7th 1996.

Mark’s father recently contacted us seeking photos of Mark during his time on Seram and the good news is that photos were found and forwarded to him. This was a wonderful outcome made possible by the special memories and enduring friendships created on Seram all those years ago. This recent turn of events prompted fellow expeditioner Ian Whitehead to write about Mark to pay tribute to a special lad who left us far too soon. 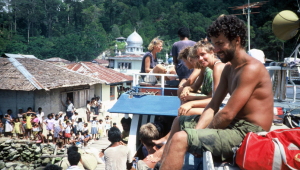 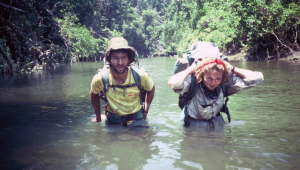 ‘Memories of Mark’ by Ian Whitehead

I got to know Mark as a fellow venturer during the 10F expedition to Seram during the induction phase on Java and on the trek up to the Kanikeh base camp. Mark stood out from the crowd for his sense of camaraderie, his good humour and his adventurous spirit. It was obvious that he had been brought up on a healthy dose of boy’s action adventure heroes (in the old school “Biggles” mode). Indeed, he would have felt quite at home in the script of a “Ripping Yarns” adventure and he also shared a “Pythonesque” sense of humour to boot.

Mark was instantly likeable, considerate, modest and possessed a keen wit, his sense for the ridiculous allowing him to make light of adverse and testing situations. I particularly remember Mark joking and waxing lyrical about imaginary, hostile adversaries (named after the expedition’s “Khong Guan” biscuit supply) who reputedly lurked in the undergrowth during the trek up to the Kanikeh base camp. Fertile imagination aside, Mark’s infectious sense of humour belied a much deeper concern and love for the natural world and his fellow human beings.  He cared passionately about global conservation issues and about the threats to the planet and its biodiversity.

I spent much of the 10F expedition working on another part of Seram from Mark, however a few memories of Mark particularly stand out in my mind including:

Mark struggling to hold up the Kanikeh longhouse from imminent collapse with improvised bamboo props, as the whole structure tilted menacingly over at a jauntily unfeasible angle;

Mark recovering from an all-night reggae-limbo party at the Solea base camp (I must admit I didn’t do too well myself that night and retired early, missing out on most of the festivities!);

Mark standing proudly on the bridge of the KM Rinjani (in the mould of Shackleton or Scott) with the captain’s nautical chart laid out in front of him (an image that particularly seemed to suit him and hint at his potential).

After the Expedition, I worked near London and used to meet up with Mark and friends regularly at the Princess Louise in Holborn and other famous London watering holes. We enjoyed some good evenings “crashed out” on unfamiliar floors of the Capital, including one night when I remember we rescued a giant green traffic cone and took it on a taxi ride across London to a little-known nurses’ residence (which someone in our group had recommended for floor space). The taxi driver even wanted to charge us extra for bringing the traffic cone along!

After London, Mark went on to study for an MSc in Crop Protection at Reading University. During this period he was plagued with severe bouts of cerebral Malaria, which he had contracted during the expedition to Seram. Mark struggled and sweated out these reoccurring episodes with his usual tenacity and characteristic good humour. He joined us once for a week on the Island of Arran. I remember him being captivated by the local legend of the Robert the Bruce’s Cave, where allegedly, the future Scottish monarch drew inspiration for the defeat of Edward II at Bannockburn through watching a spider repeatedly trying to weave its web  unsuccessfully on the first six occasions, before finally achieving success on the seventh attempt.

Unfortunately, Mark suffered from another bad bout of malaria whilst on Arran and our island hosts took the decision to repatriate him back down south, but only after he’d participated in the raucous “Shiskae Discae” and an elaborate Celtic burial ritual for my poor broken acoustic guitar (an unfortunate victim of another student night out). I have a very strange and surreal picture somewhere of Mark, high up on a Scottish mountainside, hitting some poor unfortunate over the head with the battered remains of my guitar. Happily the other guy was wearing a climbing helmet at the time (though admittedly he hasn’t been quite the same since!).

In autumn of 1991, I went off to work as a forester with VSO in Nepal, about the same time as Mark started a job with a new company. It was with great shock and sadness that I learned, some months later from a mutual friend, that Mark had been injured during a friendly rugby game with his new company colleagues, literally just a few days into starting his new job. Mark was apparently in a coma from which he was sadly never to emerge.

Unfortunately, I never saw Mark again and only came across his family’s contact details some six years later despite attempts to find them. I eventually phoned up his mother only to learn that he’d passed away just a few days beforehand. It was all very sad and final. I went to the funeral in Stratford on Avon, which offered some small degree of consolation and a just a little sense of closure.

Though I never saw Mark in his coma state, a small part of me will always wonder, somewhat vainly, if I might have made a difference and could have miraculously, brought him back to life somehow (many other friends tried, I believe). However, I do remember Mark in the prime of his life as an adventurer, a “bit of a lad”, an optimist, a good comrade and a generally decent member of the human race, just the sort of person you’d want to have along as a companion on a jungle expedition. in fact, just the sort of person that Operation Raleigh was supposed to be all about in the first place.

Mark once told me a story about a British soldier who had lost is leg in the Falklands war. When asked by a reporter how sad he must feel about the loss of a limb, the soldier reputedly replied in a cheery Cockney tone, “Sad Mate? … Not me. At least I’ve still got me b*ll*cks !”. That was Mark through and through, always the optimist and pouring scorn in the face of adversity.

Mark, I take my hat off to you and raise a glass of finest Single Highland Malt to your memory!